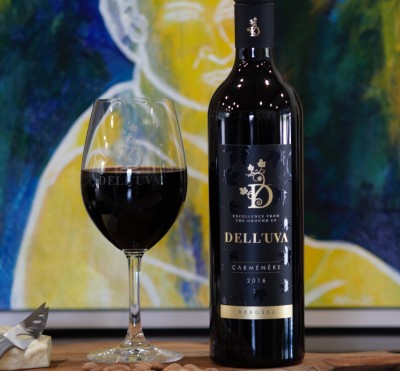 The Carménère grape is a wine grape variety originally planted in the Médoc region of Bordeaux, France, where it was used to produce deep red wines, it is now rarely found in France, the world's largest area planted with this variety is in Chile in South America

During most of the 20th century Carménère was inadvertently collected and processed together with Merlot grapes (probably reaching up to 50% of the total volume) giving Chilean Merlot markedly different properties to those of Merlot produced elsewhere. Chilean growers believed that this grape was a clone of Merlot and was known as Merlot selection or Merlot Peumal (after the Peumo Valley in Chile).  In 1994, a researcher at Montpellier's school of Oenology found that "an earlier-ripening vine was Bordeaux Carménère, not Merlot. The Chilean Department of Agriculture officially recognized Carménère as a distinct variety in 1998.

Carménère wine has a deep red colour and aromas found in red fruits, spices and berries, it imparts a cherry-like, fruity flavour with smoky, spicy and earthy notes and a deep crimson colour. Its taste might also be reminiscent of dark chocolate, tobacco, and leather. The tannins are gentler and softer than those in Cabernet Sauvignon